Forecast5 is the latest supporter to join the Bloodhound SSC project: the British attempt to smash the world speed record by driving a vehicle at 1,050 mph in late 2018. 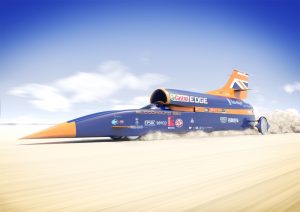 Returning from visiting the project, Jonathan and Juliet Kipps, from Isle of Man based Kipps Business Reporting, Forecast5’s UK distributors, said they felt they were supporting one of the most exciting projects on the planet.[spacer height=”20px”]

“In a world that is increasingly risk-adverse, going where no-one has been before will change travel for ever,” Kipps said. And Bloodhound’s project director, Richard Noble, is no stranger to high-risk ventures, having won the world land speed record in 1983, together with Andy Green, who will drive the vehicle over the Hakskeen Pan in the Kalahari Desert, northern Cape.In addition to being a wing commander in the RAF, Green, who was the first to break the sound barrier on land in 1997 in Bloodhound’s forerunner, Thrust SSC, has a double First in mathematics from Cambridge, which should enable him to make the split second decisions needed when driving at 1,000 mph. The Fédération Internationale de l’Automobile’s rules say that the vehicle must be controlled by a driver on board and cover the ground under its own power.[spacer height=”20px”]

“Now that Forecast5 has joined the development team, we will reduce the risk of bad budgeting and enable the project to concentrate on funding and building a vehicle like nothing we have ever seen,” Kipps said.[spacer height=”20px”]

The financial forecasting package, developed by Geof Nightingale and his colleagues at Navigator Systems in New Zealand, allows seamless comparison of various sets of data to give fast and accurate assessments. The Bloodhound accountant simply uploaded his data from Excel into Forecast5’s forecasting software and could start developing scenarios within the hour.[spacer height=”20px”]

The Kipps, Nightingale and FD Steve Currigan visited the project in Bristol on the eve of the Institute of Chartered Accountants of England and Wales’s conference for chief financial officers on October 13 and brought back a model of Bloodhound SSC to display at the conference.[spacer height=”20px”]

The actual vehicle had been dismantled for re-testing and some of the top engineers from the RAF and army were working on it. They were as enthusiastic as the Forecast5 visitors. “It’s so exciting, coming to work here because we are dealing with cutting edge engineering,” one said.[spacer height=”20px”]

As important as breaking the land-speed record and reaching 1,000mph is Bloodhound’s education programme, which has a presence in schools around the world. More than 100,000 UK children took part in Bloodhound lessons or events in 2015, and 1,200 schools took part in South Africa, too.[spacer height=”20px”]

The cockpit of Bloodhound SSC, the 1,000 mph land speed racing car, in Bristol, UK with its new sponsors from Forecast5, from left, Jonathan Kipps, Juliet Kipps, Chris Fairhead, CEO, Bloodhound SSC, Geof Nightingale, CEO Forecast5, New Zealand, and Steve Currigan, FD-Lite.[spacer height=”20px”]
The state-of-the-art carbon fibre monocoque has been tailored to the needs of driver Andy Green and will be his supersonic office during record attempts in the South African desert in 2017 and 2018.[spacer height=”20px”]

For details on Bloodhound, please go to
http://www.bloodhoundssc.com/